- October 20, 2017
I admit I own a Diesel car myself, and I am not proud of it. For sure it has some positives, but recently all the negatives came out and some cities are planning to ban those in the towns. I am certain I will not buy another one.

“The consequences of excess diesel NOx emissions for public health are striking,” said Susan Anenberg of Environmental Health Analytics in the US and one of the team that did the research, published in the scientific journal Nature. 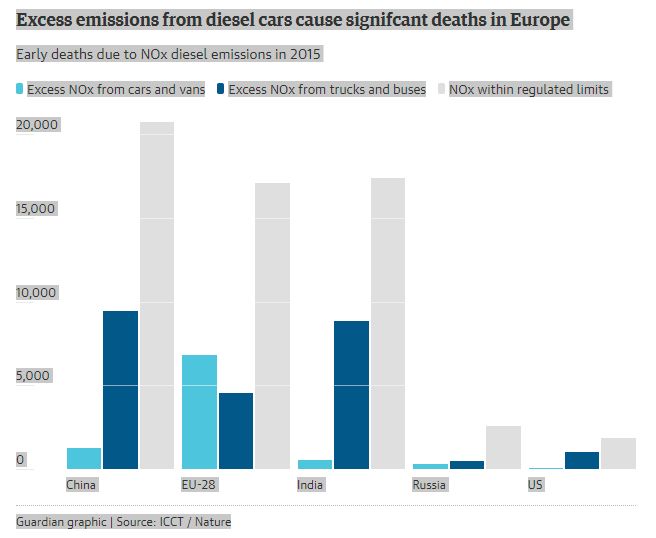 You can't blame the inventor, or even the manufacturers. With the latter one, after the emission scandal where it came out that manufacturers of diesel engines cheated the tests, could be argued about. The Norms of EU are so strict that the manufacturers risked and lost. We do not talk only about VW. Nearly all new diesel cars exceed official pollution limits.

What are those NOx anyway and where are they coming from? NOx its an common name for Nitrogen oxides like nitric oxide (NO) and nitrogen dioxide (NO2) only, but most emissions also include nitrous oxide (N2O). This gases are created during high temperature combustion of fuels where the temperature is hot enough (above about 1300°C/ 2370°F) to oxidize some of the nitrogen in air to NOx gases. Diesel engines operate at a higher temperature and pressure than petrol engines. These conditions favor the production of NOx gases. There are ways to partially remove NOx from exhaust gases trough Selective Catalytic Reduction, but it is expensive.

I dare to believe the technology has reached its limits and should be gradually fazed out. That can be very hard for the EU automobile industry which invested and still heavily invest in Diesel engine development. This means we will wait for loooong time to see it.

Pandora Moon Crew
We are an European startup bent on developing the best possible urban air pollution protection. Although in early stealth stage, we are innovating fast and there is much more to discover about us.